I’m asking only because I seem to have so many on the go at the moment, I never used to. I always used to make sure I would finish one project before starting the next and if I were to ever stop a project before completing it I would sort of know that I wouldn’t be finishing it, mainly because I had lost complete interest in the yarn or the pattern. Ever since I’ve started making items on commission dropping a project just because it’s boring just isn’t an option, which means I have a dozen projects on the go at once!

This actually works quite well for me, as when I start to get bored with one project I can pick up another. Also I find I’m more dedicated and focused on finishing a project when I have a particular time frame to finish it by. The closer I get to a deadline the more I will focus on that one project and ditch the others until the current one is completed. But making things for others that you wouldn’t necessarily make for yourself can be a challenge as sometimes I don’t quite gel with the colour, yarn or style that another person has chosen, although I’m always pretty happy with the outcome😃.

Just before Christmas I was contacted by someone asking if I could make them a Bumble Bee style blanket for his grandson. I’ve never been a huge fan of blankets which mimic an animal/inset, but I wanted my customer to have what he had asked for. I sent a few blanket pictures to him so that he could choose a style and I didn’t realise, until after, that I was trying to sway him towards a particular style of blanket which wouldn’t have as much black in it. But then that wouldn’t be a Bee blanket would it?!🐝

Thankfully he stuck to his guns and I reluctantly ordered the yellow, black and white yarn to make his grandsons blanket. I say thankfully because I’m so pleased with how the blanket turned out…

And so was he!

It took a while to get into the above project and to really start enjoying it, and that’s where other WIPs really helped. I actually think they made me stay focused, as I would just pick up another project when I would start to feel a little bit meh about the current blanket I was trying to complete. That is, until that niggling voice in the back of my head would say, ‘Hey! there’s a little boy that won’t get a Christmas present if you don’t get your ass into gear’ and then I would start to stress and crochet frantically to get it finished (to a high standard of course😜). 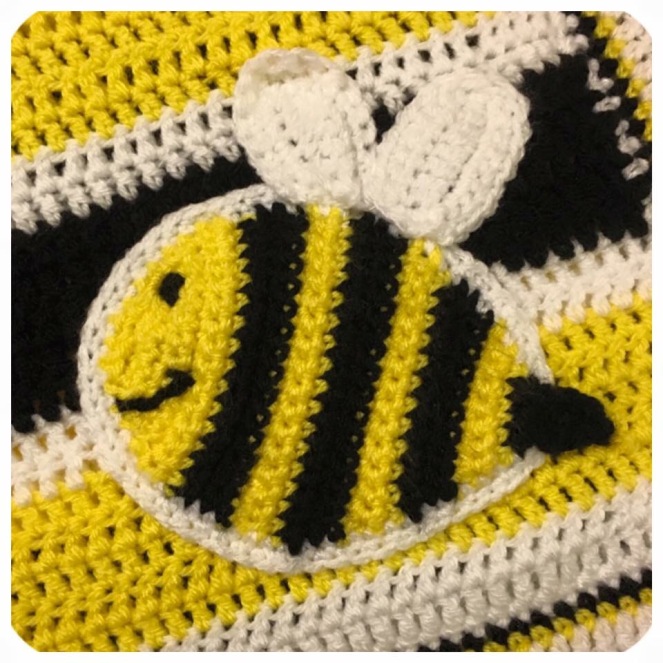 I currently have four WIPs on the go😁

One more sock to make a pair, a moss stitch blanket and a hat and cardigan set. But the one that is proving to be my nemesis is a bobble blanket for my Godson.

My gosh it the biggest ball ache ever!

Every bobble row takes twice as long as a plain crochet row, and the colour changes are killing me. I’m about three quarters of the way through and I just can’t seem to get the drive to finish it no matter how many WIPs I have. In this instance WIPs are hindering my mojo when it comes to finishing this blanket as I would prefer to do ANYTHING as a distraction, (even none crafting) than carry on with it. But I want to get it finished so bad, does anybody have any advice?

One thought on “Can You Have Too Many WIPs? ”

Hi, thank you so much for visiting my blog! My name is Adrianne, I am a proud mother of a very energetic 22 month old. I hope you enjoy reading my ramblings, which are mostly focused on my huge Knitting and Crochet obsession.
Follow Pick'a'Knit on WordPress.com